The Mysterious Death of Elisa Lam

Elisa Lam was a 21-year-old Canadian student at the British Columbia University in Vancouver although she was not registered when she left her home in January 2013 for a trip to Southern California. Reported missing since the beginning of the month by her worried parents whom she talked to everyday, her naked body was recovered in a water tank atop the Cecil Hotel in Downtown Los Angeles on February 19th, 2013 after some guests at the hotel had complained about sweetly disgusting tasting water and black water.

At the heart of this case is the  increased interest that was triggered, five days prior to her body’s discovery, by the video that was released by the Los Angeles Police Department of the last time she was known to have been seen, on the day of her disappearance, by an elevator security camera. Apart of the fact that the footage shown is very unsettling as you see Lam unable to make the elevator work, pressing all the buttons, trying to make those doors close, going in and out, hiding, talking and making gestures to some unseen person,  it was also quite obvious that either it this footage was tampered withand/or that the camera malfunctioned, leaving unexplained holes in the sequence time code of the surveillance camera in the elevator.  An attempt to understand her strange behavior was made and the extremely interesting/disturbing conclusion were that ”Ms. Elisa Lam is playing a game of hide and seek (or something similar) in this video and although at times she displays some anxiety, there is no indication of fear. There is definitely an element of play present here. It is of course also possible that narcotics are influencing her behavior. Of particular importance is she is putting herself on sexual display. While what is seen here may have no connection with her demise – if the events in this video occurred just before her disappearance, it strongly suggests that the person to whom she is attracted may have knowledge of, contributed to, or be responsible for her death.”  You can view all the details of thorough body language analysis that led to this conclusion and the complete video that was provided by the Los Angeles Police Department  here.

No one could even explain how she managed to get on the roof in the first place.  Doors and stairs that access the hotel’s roof are locked, with only staff having the passcodes and keys, and any attempt to force them would supposedly have triggered an alarm. Apart from the question of how she got on the roof, others asked if she could have gotten into the tank by herself. All four tanks are 4-by-8-foot (1.2 by 2.4 m) cylinders propped up on concrete blocks;  there is no fixed access to them and hotel workers had to use a ladder to look at the water. They are protected by heavy lids that would be difficult or rather impossible to replace from within.

After being removed from the tank, Lam’s body was to be autopsied by pathologists, Jason Tovar and Yulai Wang. They spent four hours that afternoon dissecting it and examining her internal organs. On February 21, the coroner’s office reported that they had found her death to be an accidental drowning, with bipolar disorder as a significant factor. Tovar and Wang found no evidence of physical trauma or sexual assault, although they had a rape and fingernail kit done. They found no evidence to suggest that Lam had committed suicide. The autopsy was qualified by many as incomplete and the family denied having any knowledge of Elisa Lam being bi-polar. Also there are many unanswered questions like: “Was she killed before she ended up in the tank?”, “Were her lungs filled with water?”,  ”Did she die of hypothermia or did she drown?”. The autopsy report is very incomplete and doesn’t offer many answers that should have been answered easily.

The autopsy revealed that no alcohol or recreational were found in her system. Lam’s body was moderately decomposed, bloated and mostly greenish, with some marbling evident on the abdomen and skin separation evident. Tovar and Wang found no evidence of physical trauma or sexual assault.

Since her death, her Tumblr blog was updated, presumably through tumblr’s Queue option which allows posts to automatically publish themselves when the user is away. Her phone was not found either with her body or in her hotel room; it has been assumed to have been stolen at some time around her death. Whether the continued updates to her blog were facilitated by the theft of her phone, the work of a hacker, or through the Queue, is not known; nor is it known whether the updates are related to her death.

After this tragic and unexplainable death, as if wasn’t creepy enough already, an outbreak of tuberculosis happened near the Cecil Hotel in Skid Row and the name of the medical testing kits used in this situation are called, LAM-ELISA or lipoarabinomannan (LAM) enzyme-linked immunosorbent assay (ELISA).

The Cecil Hotel (now re-branded as Stay on Main) in Downtown Los Angeles ”Skid Row” (640 S.Main Street) was intended for business travelers but in the 1950s it gained a reputation as a residence for transients. A portion of the hotel was refurbished in 2007 after new owners took over. The 1927 Hotel Cecil is a downtown landmark (and happens to be part of Pantless Alley Skid Row).  Now it is branded as “The Premier Choice of Affordable Downtown Los Angeles Hotels.” In addition to offering hotel rooms, it houses the modern Stay on Main hostel and roughly 300 low-income residential units . Now, it is full of convention attendees and tourists from all over the globe.  It has also been the site of quite a few commercials and movie filmings this year.  But, before the re-gentrification of Downtown Los Angeles, the Hotel Cecil held a dark part.

The horrors started long before for the Cecil. During the 50s and 60s, the hotel was known as a suicide hotspot.

According to the Los Angeles Times, in 1962, a woman named Pauline Otton, 27, threw herself to her death from a ninth-floor window after arguing with her husband. She landed on pedestrian George Gianinni, 65, on the street below, killing him instantly. She was just one of numerous guests who ended their lives while staying at the run-down hotel..  In an unsolved murder in 1964, the Pershing Square “pigeon lady”, Goldie Osgood, who enjoyed feeding the birds in a nearby square, was raped and killed in her room at the Hotel Cecil. She had been stabbed, strangled and raped – and then had her room ransacked. Her case remains unsolved.

According to LA Observed, the Black Dahlia, Elizabeth Short, is alleged in at least one book to have hung out at the Hotel Cecil and drank at the bar next door before she disappeared in 1947. 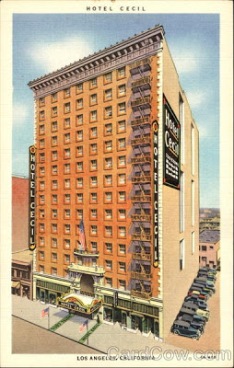 In the past, the Cecil Hotel was home to ‘Night Stalker’ Richard Ramirez, the “Night Stalker”, an American serial killer, rapist and burglar during 1984-85. He lived on the Cecil’s top floor in a $14-a-night room as he slaughtered his victims throughout Los Angeles. He was “just dumping his bloody clothes in the dumpster at the end of his evening and going in the back entrance”.  The satanist’s crimes terrorised Los Angeles, before he was finally captured and convicted of 13 murders. Ramirez was sentenced to death in a gas chamber in 1989, and on receiving his sentence showed no remorse, stating: “Big deal. Death always went with the territory. See you in Disneyland.”
Austrian Serial Killer Jack Unterweger stayed at the Cecil Hotel for five weeks in 1991 while murdering prositutes. At night, Unterweger welcomed the hookers who climbed up the Cecil Hotel’s fire escape to his room to earn $30.  He also picked up streetwalkers on 7th Street, strangled them with their own bra-straps, then dumped their bodies nearby, naked and posed obscenely. Police suspect Unterweger scoped out the sites ahead of time.  He committed suicide after being convicted for several murders.
The Hotel Cecil and Downtown’s Historic Core have an equally dark and seedy past stemming from the early 1900s when the area was a mix of those down on their luck hoping to strike it rich in Los Angeles and wealthy businessmen.

Observe elevator interior before entering. Wait until the next elevator if you are uncertain of any occupant. Females riding the elevator alone should always stand near the control panel. If accosted, press ALL buttons. If a suspicious person enters the elevator, exit before the door closes. Before exiting from the elevator, observe the corridor for suspicious activity.