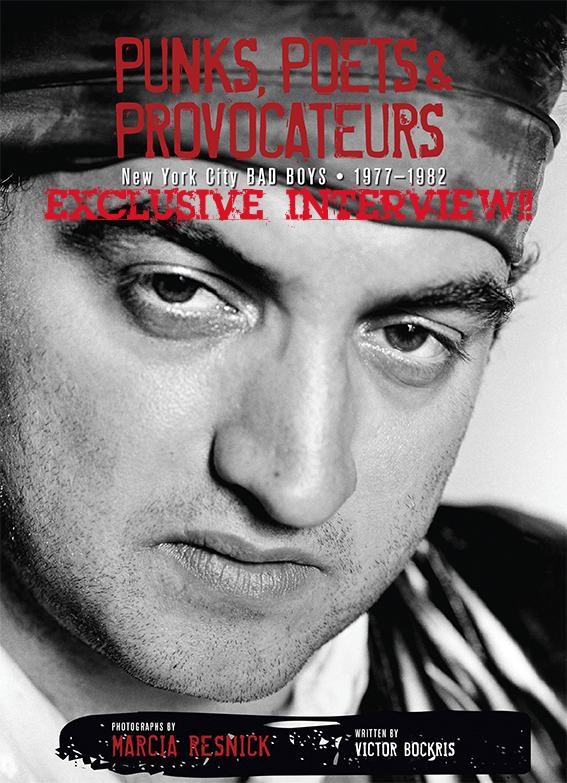 Questions and Answers About ”NYC Bad Boys” and a Lifetime Partnership

I will try to, like the Clash album says, ”Cut the Crap” and say that I heard about Victor Bockris the first time through a book called ”Conversation”, which I read avidly the first time it fell in my lap and have re-read a few times. Those Conversations were a goldmine for a Burroughs and Warhol amateur like me who believed that both of them have been to art in general what The Velvet Underground were to music. To me, ”Conversation” is an essential book that should be archived and kept for safety like a mystical mystifing artefact, exactly like Burroughs’ paranoid mind would have imagined it; like files that unknown alien forces are constantly updating, thus keeping tabs on the underworld agents. Numbered transcripts sourced and supported by audio, film, and/or photographs, describing meetings between liberating forces from one of the leading underground artistic mind and the Godfather of the surgeons of the Beat Generation, leading to a whole new way of deconstructing and re-creating different realities that were bearers of an extremely particular strain of virus called  PUNK.

I also knew, reading that book, that Victor was already working very closely with Marcia Resnick back then. I followed the timeline traced by her  photos and discovered a whole new world in Resnick’s fascinating images and thoughts, starting with Re-Visions and already seeing that Punks, Poets and Provocateurs that was only released in 2015 (yes! the very day this article was posted!) already was and always has been in the making very early on after the day those two kindred spirits met for the first time. In fact Marcia began the book the same month they both met in September 1977, and finished taking the pictures in 1982. She then worked sporadically on videos of the pictures, showed some of the images in group shows through the 1980s, 1990s and 2000s. She also participated in a traveling show, which became a book, called ”Bande A Part, New York Underground 60’s-70’s-80’s’‘ which featured the photographs of many of her contemporaries. This was showcased as a ”travelling show” in venues in Tokyo, Paris, London, Hong Kong, LA and New York, from 2005 to 2009. This was a very positive sign that her work was still alive and growing. In 2010, she had a one-woman show of her vintage portraits from the 1977 to 1982 period at the Deborah Bell Photographs in NYC. It was also in 2010 Marcia and Victor began to ”physically” put the book together. The result is a shared vision of the world that is exposed through a sincere, honest, disarming, straightforward series of photos, poems, thoughts, paintings and a variety of ways and any possible means to recreate the feelings attached to those vivid memories. Each of those forever preserved time capsules humbling me, reminding me of how fragile some of us are or were, especially some of those NYC Bad Boys, but also revealing how our weaknesses are non-dissociative parts of our inner beauty.

No need to say I was delighted when I was asked to do an article about Punk, Poets and Provocateurs in an interview format. Marcia and Victor were kind enough to gently respond to some questions I had in mind after I got the chance to read and feel ”Punks, Poets & Provocateurs: NYC Bad Boys, 1977-1982” that is righteously presented here as the triumphant accomplishment of a lifetime collaboration between two artist I admire so much. I sincerely hope you enjoy it as much as I did!!

Victor Bockris: ”We met at an opening of a photo show at the Andrew Crispo gallery in September 1977. And spent the next six weeks talking and running around town meeting all sorts of people. I helped Marcia collect back cover quotations for “Re-Visions” and published “Why I Hate My Girlfriend” about her in High Times in 1978. Fuelled by love and hate.”

LAN: ”Do you think the term Bad Boy is as appealing to the general public as it was in the 60s and the 70s? Has anything changed?”

Victor Bockris: ”Bad Boys is a generic term which has lost most of its meaning. That’s why we changed the title from Bad Boys to “Punks, Poets and Provocateurs” which had previously been her sub-title. Although Marcia does a good job defining the Counterculture’s Bad Boy Icon in her outstanding texts. ”

LAN: ”Do you see some of them as angels with broken wings?”

Marcia Resnick: ”I see Bad Boys as rebels of attitudes and codes who often shake things up in the best way.”

LAN: ”Do you still find inspiration in your old friendships and acquaintances? You must have developed special everlasting relationships with some people!”

Marcia Resnick: ”We know the people we used to hang out with and love and support them. We are always overjoyed to see them, like veterans of a war. We definitely find inspiration in all our living and departed friends.”

LAN: ”It’s a well-known cliché to say that most good artists have suffered a lot, and somehow channeled this suffering and/or anxiety through their art. Do you consider you went through that too?”

Marcia Resnick: ”Art is an act of confronting what distresses you most and overcoming the distress by turning it into art.”

LAN: ”Has it ever happened to you that on the moment something appeared to be a bad thing, but you later came to realise it was in fact a good thing?”

Marcia Resnick: ”Contradiction is one basis of creativity. Challenges that appear to be bad are often very good for you. This can also be said about artistic mistakes.”

LAN: ”What do you think Burroughs and Ginsberg (and by extension the Beat Generation) brought to the punk scene? Do you think they fit into that equation?”

Victor Bockris: ”The punk scene shone a light of affection and affiliation on the Beat scene. Allen and Bill lived in the midst of a punk neighbourhood, the Lower East Side. Punk was neo-beat.

LAN: ”What about The Velvet Underground?”

Victor Bockris: ”The Velvets were the archetypal punk band. Lou Reed was the most important person who visited CBGB’s. He supported punk from the outset. Punks loved Lou.”

LAN: ”Punk was about industry, not virtuosity.” Could you expand on what you meant by that?”

Victor Bockris: ”Punks worked very hard to make beautiful music. This industry was inspired by passion and could be accomplished with a DIY attitude as opposed to a stringent technically proficient prowess.”

LAN: ”With everything that is going right now and the overall empowerment of the world by the 1%, do you think that we would need to return back to the sources with a very simple, bold, loud, clear and shall I say even aggressive message that was the very essence of Punk Rock?”

Victor Bockris: ”I think we need to bring back the counterculture as a global force for humanity.”

LAN: ”Do you find that everything is more diluted today? Do you think that the messages delivered by today’s artists are as strong today as they were in the 60s and the 70s?”

Victor Bockris: ”Artists of the 50s 60s 70s were all connected by the umbrella of protest against the atrocities of WWII. Passionate realism is the key. Post 83 or so the people have no single ring to fight against.”

LAN: ”Do you think sex should be a hidden thing or more out in the open like in Japan? I’m asking because you represent both sexes and have lived as adults in a period Pre-AIDS and without shame but you also know what shame is… You also lived in an era in which homosexuality and transexuality were illegal. I’m thinking for example of Candy Darling, and Lou Reed who received I think 19 (if not more) shock treatments just because he had gay THOUGHTS.”

Marcia Resnick: ”Sex is like God. It’s the greatest thing that ever happened but its been co-opted by same people who say God is on our side. Nobody owns sex but a lot of people exploit it, like the Catholic Church or the Sex Industry. Obviously do what thou wilt is all of the law. Everything is permitted. Sex is good. No laws against sex are recognized in the magic universe.”

Marcia Resnick: ”Focus on learning how to live the artistic ways of life. It has great benefits but if you don’t know how to live it doesn’t make much difference”

LAN: ”Do you consider yourself a survivor? If so, what or who made you able to overcome what could have been your downfall?”

Marcia Resnick: ”Collaboration. We have helped each other survive by working to a united end on this book.”

LAN: ”The 1977 Blackout in New-York was seen as a turning point by many people because they were seeing judges and doctors turning into looters in the anonymity provided by the dark. Were you there? If yes did it have any effect on you at the time?”

Marcia Resnick: ”Sounds like a fantasy! The July 77 NY Blackout heralded a great new period because everybody walking around in Greenwich Village was exhilarated to see each other and was full of joy! People were conversing with people they didn’t know!”

LAN: ”What beauty have you ever witnessed coming out of what some would describe as a wreckage?

LAN: ”This one I guess goes out more to Victor. Since Warhol himself was always taping and taking pictures, did you feel at times that you were interviewing the interviewer??”

Victor Bockris: ”I learned about how to do interviews from Andy Warhol. I cannot understand why a book of his interviews has never been published. I wrote the first draft of “Exposures” with him. He had an enormous influence as a writer which has been strangely subdued.”

LAN: ”Since we are talking about Warhol, I was curious to find out if you saw a change in Warhol after he was shot by Solanas?”

Victor Bockris: ”Everybody says that his presence was everything before he was shot. It took him a long time to recover, but the man I met in the mid seventies had more energy than anyone. It made him cautious about hanging out with hard-core people. He really bloomed in the early 80s painting with Jean-Michel (Basquiat).”

LAN: ”Have you ever been personally the victim of a blatant injustice?”

Victor Bockris: ”No. I avoid policemen and lawyers. It is dangerous to get involved with them.”

LAN: ”Any words of advice for the generations to come?”

Marcia Resnick: ”Collaboration is the Key to Life. You can go into any field you want to, from poetry to the law, but your chance of success will always be much greater if you find other people or another person to do it with.”