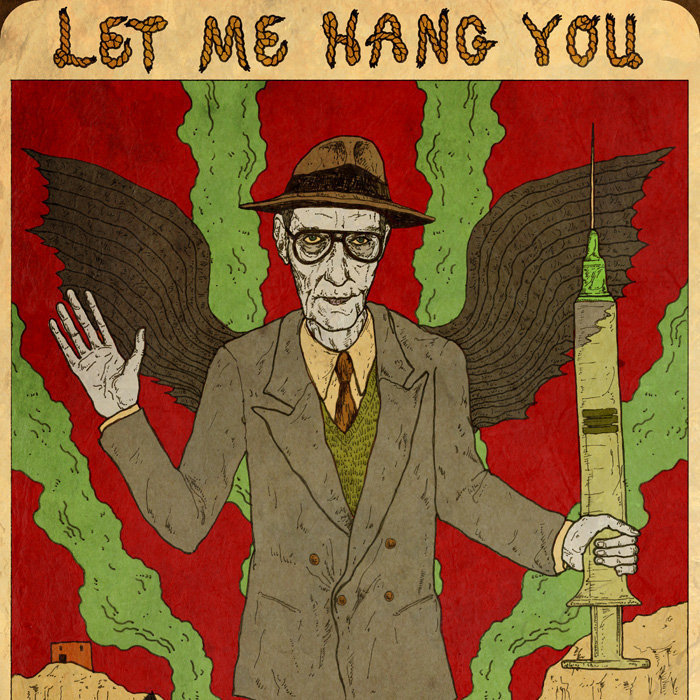 Khannibalism and Ernest Jennings Record Company have just announced the release date for a highly-anticipated album, called Let Me Hang You, featuring the late Beat generation artist and legendary postmodern author William S. Burroughs in a never-before-heard series of recordings, reading aloud from his seminal novel Naked Lunch with the accompaniment of King Khan and other acclaimed musicians.

Near the end of his life, William S. Burroughs was recorded reading some of the most shocking sections of “Naked Lunch,” his 1959 fever dream of a novel, which follows the descent of a drug addict into the underworld, for a release that paired the passages with experimental music.

The world may not yet have been ready for such an experience.

“The project got buried and put out of print very quickly,” said the producer Hal Willner, a longtime Burroughs associate who helped record that abridged audiobook, which was released by Warner Bros. (and pops up now and again on eBay).

57 years after the publication of William S. Burroughs’ seminal novel and 19 years after the death in 1997 of the legendary writer at the respectable age of 83, those surreal recordings — which featured music from the guitarist and composer Bill Frisell, along with the pianist Wayne Horvitz and the violist Eyvind Kang — are getting a second life as an album with an assist from the independent musician King Khan, best known for his raucous live shows as an eccentric punk and soul frontman. Billed as psychedelic spoken word, “Let Me Hang You” (Khannibalism/Ernest Jenning Record Co.) will be released on July 15 via King Khan’s new label, with updated ambient accompaniment for the author.

Described as “a collection of depraved genius straight from the godfather of punk’s very own mouth,” – think sex, drugs and defecation — in pop-song-length chunks across 13 tracks, using a variety of amusing voices and a lot of foul language. The focus was sections of the novel “that we found very funny in an outrageous way,” Mr. Willner, 60, said. fans of Kerouac, Ginsberg and other writers of the ‘50s anti-establishment era will no doubt embrace this revival of Burroughs’ most famous and controversial work, now modernized and given additional edge.

The producer revived the recordings that became “Let Me Hang You” — which the album’s liner notes describe as being “abandoned and collecting dust on a musty shelf as forgotten as a piece of rancid ectoplasm on a peep show floor” — recently with Mr. Khan in mind as the composer who could finish the job.

Mr. Khan, who was born Arish Ahmad Khan to Indian parents in Montreal and is now based in Berlin, said he had first discovered “Naked Lunch” as a teenager, around the time his father became addicted to cocaine. “Reading ‘Naked Lunch’ gave me a completely different view into addiction that made me sympathize with my father’s situation and helped me cope,” he said. “It made a mutation in my mind and left an ooze in my brain that I still go to for inspiration even 30 years later.”

After the 2013 death of Lou Reed, whose collaborations with Mr. Willner and artistic support of Mr. Khan brought them all together, the remaining pair found some solace in collaborating on what Mr. Khan called the “dissident art” of Burroughs, who “broke all these boundaries of sexuality and narrative, paving the way for the birth of punk.”

With contributions from the Australian garage-punk band Frowning Clouds and the vocalist and composer M. Lamar, Mr. Khan added to the work of Mr. Frisell in an attempt to heighten the unsettling mood of Burroughs’s narration. “I was making a lot of strange music, so it was perfect timing,” he said.

The writing in “Naked Lunch” “is really heavy and perverse at a time when society needs to be reminded that you can explore these nether regions of life and bring back something really beautiful,” Mr. Khan said.

Let Me Hang You is scheduled for release on July 15 and is now available in vinyl, CD, and digital format. For pre-order here. For full details surrounding the album’s inception, click here and take a look at the track listing below: