Echoes of an Emotional State

Raised in Memphis, Tennesse in the United States, Leslie Ditto has always been drawn to self expression through the visual arts. Her teen summers were spent around her father’s Harley Davidson shop where she watched him build and paint motorcycles, and it was there her fascination with fantasy and surrealism developed. Her artistic influences include the “Old Masters” such as Leonardo Da Vinci, Rubens, Raphael, and Rembrandt and she has an appreciation for the technique of glazing transparent oil color over a neutral colored under painting.

Leslie’s disturbingly beautiful oil paintings aim to convey her deep emotions and personal views of current social, political, and religious dynamics. In describing her work, she says, “My main goal is to capture my audience and bring them to my emotional state in the hopes that my test for an echo will be a success”. 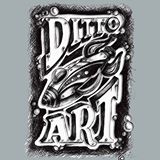