Monks Are Setting Themselves on Fire Again 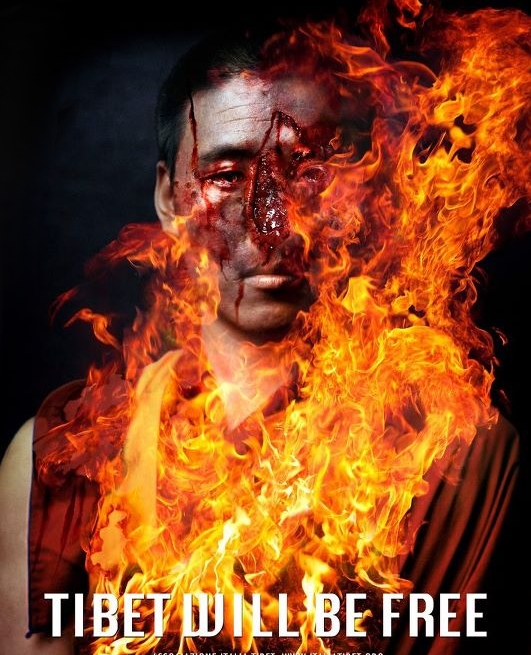 In the remotest regions of China, inhabited by the country’s Tibetan minority, an appalling uprising is under way. In the past year more than 50 monks have died after setting themselves on fire to protest against government repression.

Their uprising is mostly hidden from public view because journalists and TV cameras are barred from visiting either the Tibetan Autonomous Region or the neighbouring provinces. Tibet is the largest nation without self-determination in the world today with over 3 million Tibetans living under Chinese occupation in China and about 150,000 more in exile.  Unbelievably, 1.2 Tibetans—over 20% of the country’s pre-occupation population—have died as a result of China’s repressive policies.

As a world superpower with growing economic clout, not to mention the world’s most populous nation, there is little other nations can do, either in response to tragedies like the Cultural Revolution or Tienanmen Square massacre, or to ongoing occupations like that of Tibet.

Tibetans know this. The Dalai Lama has said since the late 1990s, that he would accept Chinese rule as long as Tibetans had “a high degree of autonomy,” and the Chinese regime stopped the population transfers that have made the Tibetan capital of Lhasa into a majority-Chinese city. But despite eight years of talks (from 2002 to 2010) and the Dalai Lama’s retirement from political life in 2011, not only has no progress been made, but the situation has steadily gotten worse.

Tibetans know this too.  Outside of Tibet, the younger generation has questioned the Dalai Lama’s conciliatory policy.  Inside of Tibet, the younger generation has become desperate, and self-immolation has become the desperate protest of choice.  Echoing the self-immolation of Buddhist monks in Vietnam, the first such act took place in India in 1998, but the tactic began to spread in earnest in 2011.

Since then, 110 to have burned themselves to death. 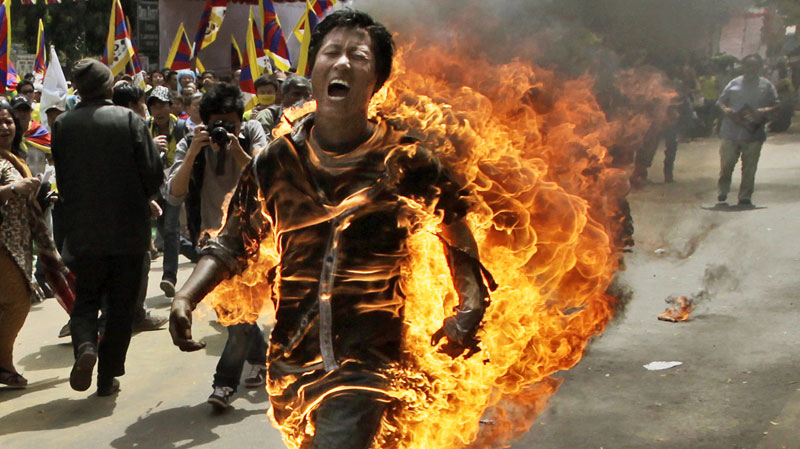 Dying by fire is said to be the greatest human fear but there is also a specifically Buddhist flavor to the act.  The Vietnamese monk Thich Nhat Hanh wrote to Martin Luther King, Jr., in 1965 that “to burn oneself by fire is to prove that what one is saying is of the utmost importance.”  Yet the image of a monk or nun seated still in meditative posture while flames devour his or her body is also a provocative image for self-transcendence.  It has become iconic.

Here is a list that provides summary details of the self-immolations by Tibetans in the PRC since February, 2009 (all except one, by a Tibetan woman in Beijing, have taken place in Tibet).

This monk who also chose immolation belonged to a Buddhist revivalist group which has been campaigning against the Muslim halal method of slaughtering animals. Of course this is very graphic. The 30 year old Monk set himself on fire outside the holiest Buddhist shrine in the country – the Temple of the Tooth in the central city of Kandy. He died in intensive care in the capital Colombo the following day.

I can’t help to think about the one people have named ”The Little Buddha” who’s main concern after alleged 7 years of meditation was the sacrificial slaughter of animals. I have to say that if these courageous people amin goal was to give me food for thoughts, they have succeeded. After seeing those images and thinking of how one is willing to go through such pain to make a point, YOU GET TO THE CONCLUSION THAT THERE HAS TO BE SOMETHING GOING ON WRONG OUT THERE THAT IS VERY VERY WRONG… They say that it utlimeatley is the same result anyways. You are arrested, beaten and left to die. You might as well make it count!

I always saw Tibet as the most spiritual place in the world. The main trend imposed by the most powerful instances in this world seems to be to eliminate anything that has more power than money. To me this tells a lot about why such a relatively insignificant economic and military force like Tibet is the target of so much cruelty and basic civil rights violations. To top it all China blames the Dalai Lama and his ”associates” to be behind most of these protests. Well I seriously doubt the Dalai Lama would impose such a thing to anyone and if they were I can only admire them to be so strong to do what they do. Even if it seems horrible to us. What they endure must be worth it.

Just so that you know. More and more of these people (not only monks) are making damn sure to not fail in their attempt to burn alive as they also DRINK the gasoline and TIE UP THEIR BODY WITH BARBWIRE so that the fire will be harder to put out for those who would like to help.