The Girls Band That Rocked the World! 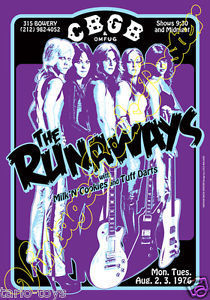 Cherie Currie is known to be the lead singer of one of the best punk-rock girl band, The Runaways. She wrote her autobiography “Neon Angel: A Memoir of a Runaway” (Harper Collins) and a movie was made based on those memories. Looking at their story it really brought to my attention that there’s a lot of touchy subjects about the Runaways, including allegations of rape and the incredibly rapid demise and fall of singer Cherie Currie. It has been put on a film ”The Runaways’‘ which most striking thing about the trailblazing bad-girl rock band from the 1970s that spawned Joan Jett, is how authentic it feels. The clubs are properly scuzzy. The dialogue is properly raunchy. The actors can properly sing. The hair is fried and feathered, the skin spotty from weeks of running on little but potato chips and estrogen. From the adrenaline rush of performing to the monotony of rehearsal, it’s a vivid snapshot of life on the road for ambitious teenagers who are constantly told that rock ’n’ roll “is the sport of men.” (And that’s their own manager talking.)

The rock lifestyle has been notoriously difficult to get right on film. The mainstream fantasy — sex, drugs, hard-core partying — usually trumps the more tedious reality of musicians striving for success but often becoming trapped by it. The result has been films that end up either bloated and cartoonish (see the American Indian shaman following Jim Morrison around “The Doors”), sweetly sanitized (see the intercourse-avoiding groupies of “Almost Famous”) or as road-to-ruin predictable as “Behind the Music.” But since 2002, when the hyperactive “24 Hour Party People”captured the dance-oriented music scene in ’70s and ’80s Manchester, England, there has been a trickle of rock biopics that get the milieu and the music just right, like “Control,” the story of Joy Division, and “What We Do Is Secret,” the story of the Germs.

“The Runaways” is the rare movie to address the female rock experience. Until now the touchstone has been the fictional 1982 cult film “Ladies and Gentlemen, the Fabulous Stains,” a look at three skunk-haired female punks who make proclamations like “Every girl should be given an electric guitar on her 16th birthday.”

One thing is for sure, there is a lot more to The Runaways than meets the eyes in a good way but also in a bad way, not because of the band itself but because it puts in question everything that surrounds the ways a girl band should be managed as well as in the way we perceive them. There is a right dosage of sex appeal that should be used and the music should always come first in the fashion these bands are promoted and presented to us. Not that there I find anything bad about using beauty, image, and being sexually provocative but I really do feel that women should be appreciated for their talent more than their female attributes. It’s such a shame that back then some men used their position of power to take advantage of them sexually or abuse them any other way. As I look back on the Runaways history, It sure makes me wonder if we are now such a long way from those days when rape was almost tolerated because the victim was dressed in a provocative way. Now I do think the Runaways weren’t presented to us in a oversexualised manner but there still has been allegations of rape and what went on behind the curtains certainly doesn’t appears to be very respectful, and I’m not even mentioning stuff involving under aged girls.

Now I don’t know if these allegations are true but it sure reminded me of the recent coming out of Alice Glass, singer from the band Crystal Castles, with allegations of abuse by CC co-founder Ethan Kath who is, in turn, suing Alice Glass for defamation over those rape allegations. Now once again we enter this grey zone of he said she said that seems to be so recurrent as soon as female artists are involved. It seems I have fallen into my own trap, talking about rape allegations instead of talking about the music but these issues have to be addressed and part of the solution is how we perceive that sexual provocative attitude that for some artists, goes hand in hand with punk rock and always will be. So when you pick up and listen the first album of The Runaways released in 1976, maybe you will get a different message and ”listen to it with brand new eyes” since you have swallowed the ”Cherry Red Pill”.

“This photo is Cherie Currie, the lead singer of The Runaways on the right, her twin sister Marie is on the left and the doll in the middle is Vicki Razor Blade from Venus & The Razor Blades. I had never seen Marie before and before this day, I did not have a clue that she had a twin. My session was supposed to be just with Cherie at home way out in the San Fernando Valley. At first sight of Marie, I did a massive double take and it was a must that she be in the photo. Vicki Razor Blade just sort of showed up looking hot and stylish. Needless to say, the Japanese went nuts where they saw these photos. This sort of thing just does not happen today.” -Brad Elterman

“I made a few trips over to the home of The Runaways lead singer, Cherie Currie, in the San Fernando Valley. I was shocked to find out that she had a twin, Marie. The family sort of kept her hidden and Cherie was very protective of her, but she let me snap these photos in their teenage bedroom. None of that photo studio stuff for me!”-Brad Elterman

Here is a documentary a found about The Runaways called EDGEPLAY Enjoy!

3 thoughts on “The Runaways”