Also known as the Noir Prophet of the Cyberpunk subgenre, William Gibson is an American Canadian science fiction novelist. In his short story, Burning Chrome (1982), Gibson used for the first time and invented the term cyberspace and later used the concept as a base for his debut novel, Neuromancer (1984). Gibson served as an iconographer for the information age before the wide spread of the Internet in 1990s. William Gibson is also associated with very accurately predicting the rise and upcoming popularity of reality television, video games and the World Wide Web. In 1999, The Guardian stated William Gibson as the most important novelist of the past two decades. His vast array of works includes authoring ten acclaimed novels, above twenty short stories in addition to making contributions to various major publications. Pressing a strong influence on the works of other science fiction authors, academics, technology and cyberculture, Gibson has also extensively collaborated in the fields of performing arts, music and film on different projects.

William Ford Gibson was born on March 17, 1948 in Conway, South Carolina. However, he spent most of his childhood in Wytheville, Virginia where he moved with his mother after the death of his father at an early age. Leading a disturbed childhood in isolation, Gibson wanted nothing more than to become a science fiction writer by the age of 12. An anthology he bought on Beat writing at the age of 13 exposed Gibson to the works of Allen Ginsberg, Jack Kerouac and William S. Burroughs creating a profound interest in the genre. Frustrated by his constantly poor academic performance, Gibson’s mother sent him to the Southern Arizona School for Boys in Tucson, Arizona. However, Gibson dropped out of the school before graduation at the age of 18 following the death of his mother. He travelled around and immersed himself in the counterculture. In 1967, Gibson moved to Canada where he spent many weeks of joblessness and homelessness before appearing in a CBC show about the hippie culture in Toronto. Also in Toronto, Gibson met Deborah Jean Thompson. The two travelled together and got married in 1972, settling in Vancouver, British Columbia.In an attempt to qualify for generous student financial aid, Gibson attended the University of British Columbia earning a Bachelor’s degree in English. The exposure to various forms of fiction and literature thoroughly enlightened Gibson, encouraging him to compose his first short story, Fragments of a Hologram Rose. Gibson further strengthened his writing skills following a master’s degree in hard science fiction. At a science fiction convention in Vancouver in 1980, Gibson met punk musician and author John Shirley who not only encouraged Gibson to pursue writing as a full time career but also became his lifelong friend.

No Maps for These Territories

No Maps for These Territories is a brilliant independent documentary film made by Mark Neale focusing on the speculative fiction author William Gibson. It features appearances by Jack Womack, Bruce Sterling, Bono, and The Edge and was released by Docurama. The film had its world premiere at the Vancouver International Film Festival in October 2000.

Science fiction author William Gibson is best known for 1984’s Neuromancer, a novel often credited with jump-starting the cyberpunk genre. Set in a virtual landscape of rapid-fire connections and published long before the World Wide Web extended its tentacles into your home and mine, Neuromancer quickly established Gibson as a visionary in certain circles (though the novel drew on many influences, from Raymond Chandler to William S. Burroughs to Philip K. Dick). Coining the phrase “cyberspace” cemented Gibson’s reputation, and a penchant for being reclusive didn’t hurt either.

In his new documentary on Gibson, No Maps for These Territories, director Mark Neale has loaded a limousine with digital video cameras and strapped his subject into the back seat for a whirlwind ride through millennial America. As Gibson ruminates on his life and work and pontificates about our rapidly changing times, Neale layers pertinent imagery and found footage over the author’s talking head to create a digital collage. He messes with the passing landscapes and street scenes we see through the limo’s windows, often speeding them up or adding pixilated images, presumably as a visual metaphor for the information superhighway or the accelerating pace of modern life. A New Age-y wash of techno music accentuates the road-to-nowhere vibe.

Gibson’s is not the only face we see. For some reason – perhaps because Neale designed the multimedia presentation for their Zoo TV Tour – U2 members Bono and The Edge are on hand to read from the author’s work and offer observations like “Neuromancer is a rock and roll book.” Gibson’s fellow cyberpunk pioneer Bruce Sterling (Crystal Express, Heavy Weather) turns up as well, to offer some slightly more heady analysis. 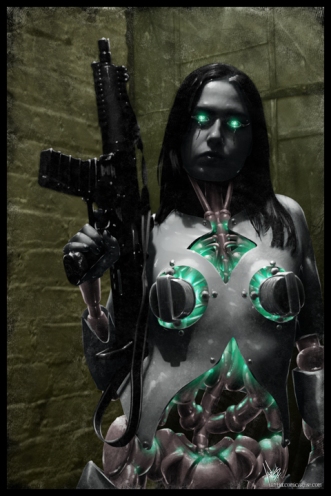 The meat of the film, however, is Gibson talking about all things Gibson, and if you’re not on his wavelength – if phrases like “posthuman” and “postgeographical” make you go “postal” – you may begin to feel like a cab driver with a chatty passenger you just can’t seem to ditch. But for those interested in the issues he touches upon – everything from the future of technology to the pros and cons of drug use – No Maps for These Territories proves to be a diverting 88 minutes. Some of Gibson’s most interesting musings are autobiographical – describing the arrival of television in the form of an intermittent test pattern he would watch in awe-stricken anticipation of things to come, or telling his draft board that his ultimate ambition in life was to take every mind-altering substance known to man. He often comes off like one of the loopy denizens of Richard Linklater’s Slacker – at one point recalling the moment he heard that Michael Jackson had married Elvis Presley’s daughter and realized that his job of being a science fiction writer had just gotten more difficult.    – Scott Von Doviak