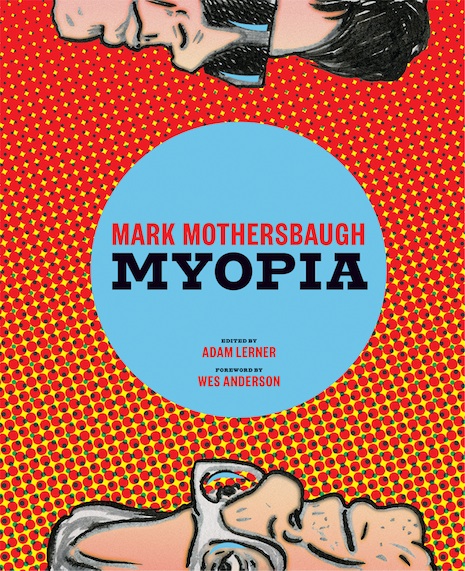 Is there such a thing as a natural-born pop artist? I don’t really think there is, but the voluminous graphical art of Mark Mothersbaugh, well known as the frontman and co-founder of DEVO, is enough to give me pause.

The Museum of Contemporary Art Denver on Thursday opened Myopia, a very large exhibition showcasing the art of Mark Mothersbaugh that runs through April. Adam Lerner, director of the museum and curator of the show, takes pains in the book accompanying the show published by Princeton Architectural Press, to emphasize Mothersbaugh’s almost preposterous productivity: “Mark Mothersbaugh is a fountain of creative energy. He creates postcard-size drawings and collages on a daily basis (more than 30,000 of them so far) and uses them as the basis for other works. …”

It’s well known that the spark that led to DEVO’s formation was the tragic shooting at Kent State in May 1970, which Mothersbaugh and Jerry Casale witnessed. Mothersbaugh puts it well in the book: “For a lot of reasons, the shootings gave me a focus.” To flip throughMyopia is to wonder just what button that event pushed in Mothersbaugh’s brain—there seems to be no cessation of the combinations of icons and slogan-like textual elements that Mothersbaugh can’t put together in an arresting image. Lerner wants to emphasize that DEVO is merely one channel for Mothersbaugh’s creativity, with the works featured in Myopia representing some of the others, and that’s perfectly true. It may not be “fair” that DEVO overshadows the entirety of Mothersbaugh’s other output, but that’s the nature of showbiz. A less curmudgeonly way of thinking about it is that Mothersbaugh has found success in the opposed worlds of pop culture and high art in ways that reinforce each other.

It kind of goes without saying for anyone who knows his or her DEVO, but Mothersbaugh’s sloganeering impulse is strongly influenced by advertising. Picking almost at random from the images, you can find phrases in Mothersbaugh’s pictures such as “Don’t Bullshit God, Padre!” “Press My Tummy, Buttwipe!” “I’m Keeping Score, You Fiend!” “Soiled Linen Pantaloons, Yakety Pants,” and on and on. The exclamation points aren’t incidental—there’s a hectoring quality that maybe prevents Mothersbaugh’s images from penetrating the upper echelons of art, but he’s awfully adept and they function really well below that threshold. Hell, even the ones without words are almost as emphatic—the man understands his icons. As for originality, obviously Mothersbaugh owes a huge debt to the pop art movement of the 1950s and after: The Ben-Day dots, visible on the cover, are obviously a nod to Roy Lichtenstein and through him to pop art in general.

My guess is that 90% of DEVO’s fans have no idea just how startling and accomplished an artist Mark Mothersbaugh is. If you take DEVO’s output and convert it to a collection of paintings, it would look a lot like the pieces in Myopia—possibly just because of the sheer number of postcard-style paintings and doodles Mothersbaugh has produced, the graphical art ranges a little wider and more freely than DEVO’s catalog, for reasons that should be mostly obvious. Also, the pretense of the Devolution schtick isn’t quite as present—the levels of pessimistic irony are a little flatter in the paintings, so you can apprehend it a little easier. It’s still about showing you the ugliest side of our noisy culture somehow, but you can admire it purely as an aesthetic thing without the oxytocin hit of DEVO’s spastic 4/4 beat. 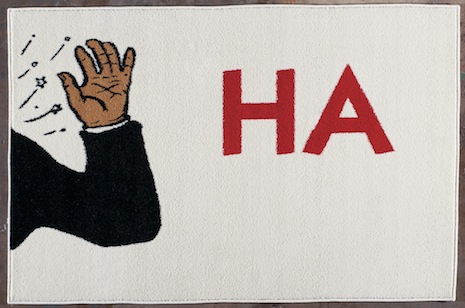 Here’s the first section of a roughly 75-minute interview conducted at the Museum Of Contemporary Art in Los Angeles a month ago:

by Martin Schneider in Dangerous Minds

One thought on “MYOPIA”