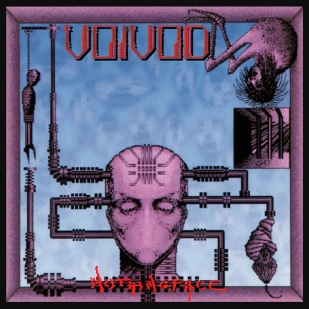 Voivod‘s fifth studio album Nothingface was released by Mechanic/MCA Records on October 13, 1989. The album most definitely marked a turning point for the band, expanding their horizon’s and exploring more progressive sounds. It was also definitely their most successful album to date. It’s where I picked up Voivod myself, having worked to make a video clip outta 2 tracks from their previous album ”Dimension Hatröss” with director Claude Grégoire. Away provided a very cool visual look to Nothingface that gave him its homogeneity. Everything makes sense. it’s all the same idea, from the same minds all around. One image for each song. (include the cover).

The first track ”The Unknown Knows” is very convincing. Having a philosophical New Vision of all things being hyper real in a universe as cold as the temperatures reached in the Great White North. It’s crude and doesn’t leave you hanging, giving it all to you. If its slowing down its only to pick up on an even more catchy beat. It’s perfect for Snake’s way of singing but I do prefer the second track by a long shot. ”Nothingface” is very melodic and has you want to sing along as it says ”Synchro freeze, Loop rewind, Synchro freeze, Loop rewind, Forward speed” and then the rhythm abruptly changes for something more aggressive, totally new rhythms for Voivod but at the same time bearing their undisputable signature. The lyrics are not that existentialists as you would expect from the title but are rather like what you would think of a humanoid and the way it thinks. It’s somehow very impersonal and has nothing of a didactic philosophic rambling which is always a good thing. No one likes being told what to do or what to think. It does raises questions but in some fast pace action type of scenario. Bubba is not preaching on the couch here. It’s rather life passing you by at an extreme speed, I guess Voivod were in full inspiration phase and delivered one of their best change for a long time and that was the album that would predict what Voivod will be in the future: A constant source of surprises and a blend of style never seen before but always very recognizable. This is compelling me to hear the surprising cover of ”Astronomy Domine” that you can hear on the fantastic Pink Floyd album ”UmmaGumma”. The track was composed by Syd Barrett while he was still in the band and appeared for the first time on their debut album ”The Piper at the Gates of Dawn”. It’s a magical experience to listen the tribute that Voivod made out of it. The clip that  was brilliantly put together by Pierre Dalpé also really helped to bring that song to being the one almost everyone has heard once in their life, either from Pink Floyd or from Voivod… The 2 versions are very much alike but Voivod’s has a metal edge that Pink Floyd doesn’t have. The guys from Pink Floyd okayed it and liked it very much by the way. I should have known what they would do with it when Piggy played the song to me and uttered all the others to ”To not say a word”. I should have guessed they would make a cover out of it but it was a magical idea. It made people realise how much Voivod is capable to make something new with any old prog/psychedelic track.

”Missing Sequences’‘ is not to be underrated for it is very harmonious too while changing rhythms very often, a trick Voivod has mastered all throughout their career and continue to do with brio.  It starts like some Alice Cooper song but soon becomes less like a lullaby and becomes more progressively a chant then a melodic heavy tune… Again with that particular style that is really a revolution for Voivod’s fans. Some may have found it not trash enough but Voivod are not a band that can keep on redoing the same formula over and over. They once were the heaviest band on Earth but this is new and it has nothing to wanting to be part of a pop movement since it has evolved in a totally Voivodian style.

”X-Ray Mirror” starts like something we have heard before but again its a trick. Even if it’s not a solid piece, it does its job and makes the flow of the album fall into the next song perfectly. it has a very good verse when the harmonic part where they sing ”I can’t believe this is my image/ Like the mirror without a frame”. It’s a perfect example of Voivod can do constant changes in the rhythm of a song but that it holds together perfectly because of the Voivodian signature as they sing in the end of the song in a very Burroughsian style: ” Within the mirror, Into the chrome lake, The glass is broken, But I look the same” and you hear the mirror being broken…

Follows ”Inner-Combustion” that brings a sense of urgency all of a sudden as some chemical reaction takes place as you listen to the lyrics that are very corrosive and visual: ”Catalyst fusion, Inner combustion, A transmutation, For I am all, Light rebounds, Pure neon, I surround, Light rebounds…” that leads to another reaction that seems to have links with racism or any kind of prejudicial thinking as ”Pre-Ignition”, seriously and meticulously deconstruct the way some narrow-minded people might be thinking, some leader whose ideas are not very brilliant.. Nothing shines ”Into my Hypercube” where everything is constantly changing and anything can happen without any prerequisites signs, the only thing making sense and linking git all being our creativity and our clairvoyance, it feels like it isn’t for anyone to be able to understand and make sense of everything that’s going on in this universe, each one of us isolated into our hypercube, trying to survive this infamously cold universe. All this leaves you broken and as the ”Sub-Effect” conquers your senses one by one, broken down by society and their lack of control of technology. It’s there that resides all the evil. 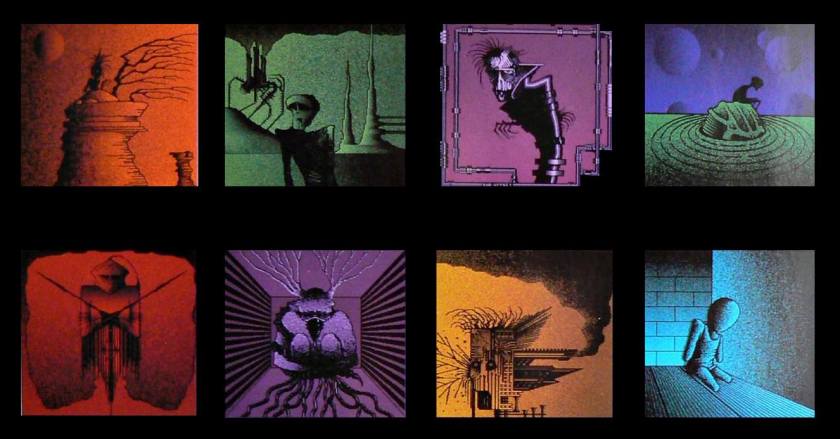 Done by all Voivod original members:

Nothingface was Voivod’s most successful album to date, and their only album to enter the Billboard 200 charts, where it peaked at number 114. The album’s third track, “Astronomy Domine” (a cover of Pink Floyd) was made as a music video and received airplay on MTV’s Headbangers Ball.

In 2005, Nothingface was ranked number 350 in Rock Hard magazine’s book of The 500 Greatest Rock & Metal Albums of All Time.