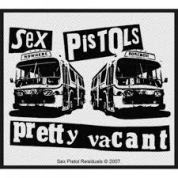 “That’s another thing done that night with Glen. Glen had this idea of the band being like, as he put it, “Soho poofs,” I suppose very much like Oscar Wilde, which is where I thought he was coming from. We’re not talking like overtly gay overtures here or anything like that; it’s really just the style of dressing. And that’s never how I have seen myself. I couldn’t imagine Mr. Rotten in frills and lace. And so “Pretty Vacant,” the concept, turned into really just kind of a football chant. And it was adopted on the terraces by quite a few firms – firms being gangs of hooligans…”#JohnnyRotten

“Malcolm McLaren had been going back and forth to the States to be involved in the rag trade and buy old Fifties clothes because he had a Teddy Boy shop, and I knew he ran into Sylvain Sylvain from the New York Dolls and went backstage. Malcolm came back with fliers for the shows and he brought back set lists, but none of these bands had made records at that stage. One said “Blank Generation,” and that got me thinking about how there was nothing going on in London, and there was a real air of despondency and desperation, so I came out with the idea of “Pretty Vacant.”#GlenMatlock